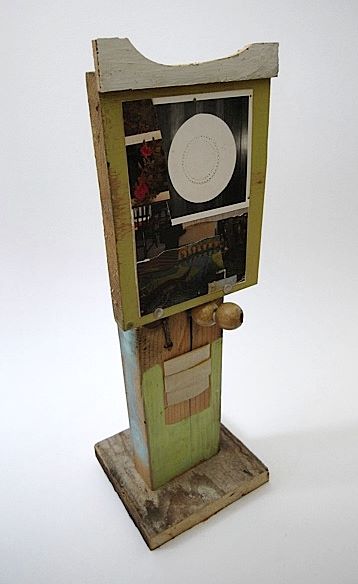 GRIDSPACE is pleased to announce an exhibition of sculptures by Grand Rapids, MI-based artist Tom Duimstra entitled Vague Ideas. Tom Duimstra is an internationally recognized, self taught artist who has been showing his work since the mid 1970's. His first show was at Race Street Gallery (which later became the UICA) in Grand Rapids, MI. By 1980, Tom was focused on painting and was also working in clay and creating 3-D wall sculptures. Throughout the 1980's he was painting consistently and found it to be increasingly difficult to balance everyday life with his artistic drive. He still held a day job as a supervisor of a custodial crew at a local college as a way to support his family. He reached a point in 1985, when he decided to make the transition to being a full time artist. One of the galleries he was showing at was Art Mecca in Chicago where he was part of a group show with Howard Finster, Mose Tolliver, William Dawson, Inez Nathaniel Walker and James Harold Jennings. That was in the mid 80's, and it served to place Tom in the category of being an Outsider artist. His work has always contained many autobiographical and confessional elements and that seemed to add to the classification as well. During the 1990's, Tom showed work at various galleries throughout the U.S. and participated in group shows in Paris and the Netherlands. His work has been widely sought after and he has pieces in collections throughout the U.S. and Canada, Europe, Japan, Korea, Mexico and Australia. Celebrity collectors include members of the rock bands Smashing Pumpkins and Soundgarden, author Tom Robbins, actress Susan Sarandon and comedian Roseanne Barr. By the year 2000, he had developed a reputation as an Outsider artist, but was working in a different direction. Tom began creating 2-D found object assemblages, being especially drawn to the raw nature of rusted metal. His paintings took on a more subdued color palette and became increasingly non representational. Currently, he is focused on large scale abstract paintings, metal collage and minimalist sculpture. His inquisitive nature and the need to create keep him continuously striving to refine and redefine his vision. The installation will be on view from October 4 to November 3, with a reception for the artist on Saturday, October 4 from 6-8 pm. Tom will play music with BNDL that evening at 7.